28 Nov Camel racing: one of the oldest sports and still hot and happening

Camel racing: one of the oldest sports and still hot and happening

Thousands of years camels played a vital role in our region. They impacted all aspects of daily life in the desert. They were used for travel, food and shelter. And they were also used for entertainment and competing during celebrations and events.

Camel racing is the ancient and most important traditional sport of the Bedouin. Famous around Jordan and the Arabian Peninsula. Camels are slow starters but can reach a top speed of 65 kilometer an hour. A racing camel looks like an enormous greyhound. They are streamlined with long legs and small humps.

In an official camel race there are prices for the first, second and third winner. Cars, swords and money are common prices. Although the sport is suitable for gambling (like horse racing) it not part of the camel racing as it is forbidden in Islam. 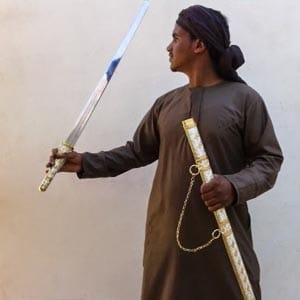 Almost all races take place during spring and fall. The most important and famous camel race in Wadi Rum is the Sheikh Zayed Camels Race Festival. During the races members of different Bedouin tribes all compete against each other. Sometimes races are still held on a sandy plain or in a wadi. But these days the majority of the camel races take place at the camel race track.

On the two-day final stage of the Sheikh Zayed Camels Race Festival more than 200 camels competed. The races took place at the race track near Disi in the last week of October. Just a few competitors from Saudia Arabia completed this further all Wadi Rum villages affair. We were very happy that one of our uncles won a sword with his camel.

Jockeys have been replaced by robots 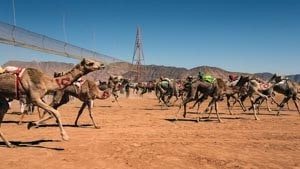 Since about 10 years the use of jockeys in official camel races is prohibited by law. They are replaced by ever evolving robots which consist of a frame with the receiver, motor, battery and whip. They are controlled by the owners. Who drive their SUV’s and pick-up trucks next to the track in order to communicate with the camel via walkie talkie’s. The use of robots over jockeys helped the camels to break all previous speed records. But improvements can still be made. Beside technical problems the most common problem and challenge is interference with another transmitters. Which can result in shouting at somebody else’s camel.

Over time camel racing evolved into an official and professional sport. Specialised farms, intensive training programs and new technology are used to prepare the camels for their racing future. Camels that win races or perform well during races, can be sold for very good prices to buyers from Saudi Arabia and other Gulf states. Their value can raise till the staggering amount of 1 million USD. Therefor thoroughbred camels can be lucrative business for everybody who can afford to buy and breed racing camels.

Do you want to attend a race?

The data of bigger races are published a few week in advance. But only a few days before a race it will be confirmed. This makes attending a camel race during your stay a challenge. Especially if you are on a tight schedule. If you are interested in attending a race, let us know upfront. If a race takes place during your stay, we will reserve ‘seat’ in one of the cars for you. Be prepared for a unique, exciting once in a lifetime experience. And lots and lots of dust and sand.

See you in Wadi Rum desert,